Agencies – should you set up a subsidiary?

If you run an agency then you may wonder whether you should set up a subsidiary.

There are some very good reasons why you may want to do this, but as with anything in life there are some downsides too, so in this post, we’re looking at the pros and cons of setting up an agency subsidiary.

What is a subsidiary?

In this case, the subsidiary is under the complete control both legally and from a management point of view of the parent company.

Note that this is totally different from a “Trading as” arrangement. This is where a company chooses to use a name or brand that may not be the same as the legal name of the company, but there is not a new entity created.

Although in the vast majority of cases the subsidiary is a limited company, that doesn’t necessarily have to be the case. A subsidiary can be another type of entity such as a partnership or non-profit organisation.

A subsidiary can also be created where a company owns a majority of the voting shares in another company. Typically this will be where the company buys into another enterprise, where it brings in external investment into a subsidiary or where it has granted shares to senior employees.

Until now we’ve looked at the legal ownership of the subsidiary but in accounting terms, there is another reason why an entity may become one and that is control.

From a financial accounting point of view, if a business is able to exert power over another entity then it may become the parent company.

The International Accounting Standard IAS27 requires a business to be reported as a subsidiary where it has the power;

In practice though, these instances will be few and far between. 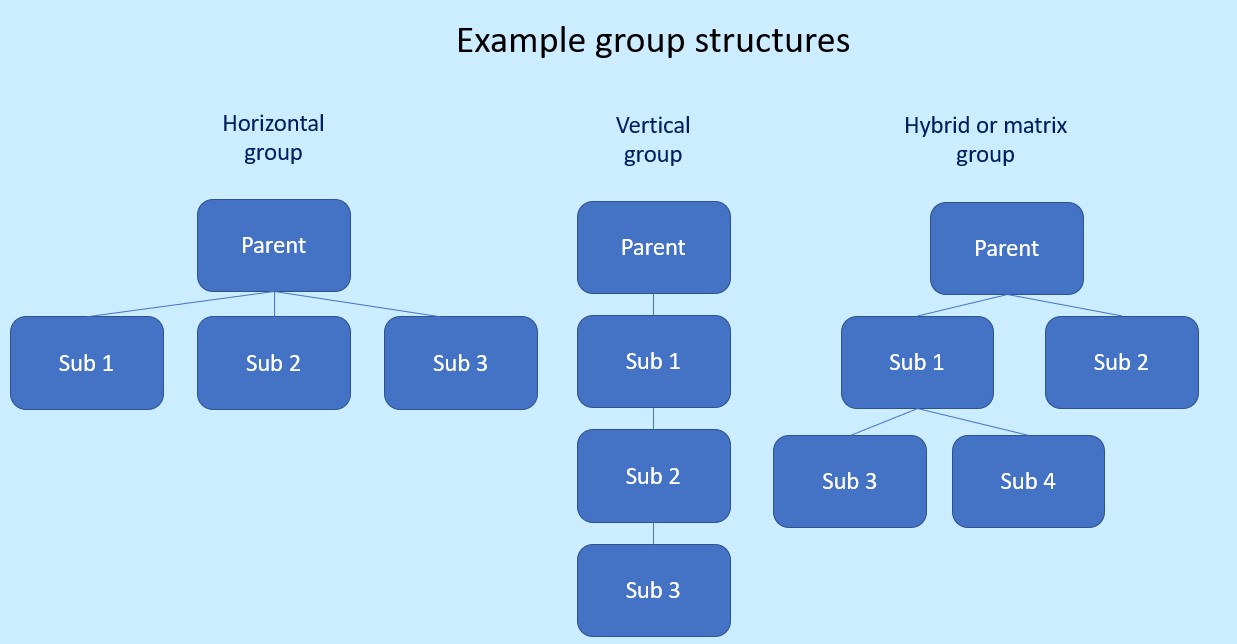 The benefits of a group structure

Many of the world’s largest brands exist in a groups structure, either as parents or subsidiaries.

For example, Coca-Cola uses a group structure to separate out its geographical activities, manufacturing and different brands.

And other businesses, like Premier Foods, buy and sell brands, bringing them into a group structure and then selling when the time is right. The parent company is largely unaffected by the purchase and sale of the brands and they almost become a commodity.

So the use of subsidiaries can be for an number of reasons and we wouldn’t ever suggest that there is a ‘right’ or wrong way to structure a business.

However, here are some of the benefits that may help you.

It can be a mistake to think that a one-size-fits-all approach will work in every situation.

This allows them to deliver high quality, knowledgeable support for their customers and means that their marketing can be fine-tuned to appeal to the specific market that they are looking to work in.

Few people would argue that global enterprises are the same as SMEs so it can be a mistake to think that you can use the same operating model to work with both types of customer.

Working with public bodies takes a set of completely different skills from serving start-ups and this can mean an entirely different business model.

Trying to shoe-horn this into one business often means that the company needs to make compromises that can affect efficiency, service levels and ultimately, profitability.

Whilst they may be in the same industry, a group of subsidiary companies can be formed to work with their specific customer type, meaning that each business model is as efficient as it can be.

The problem is that when you mix up different service levels in the same business it can often present a confusing picture of the brand.

Separating out different service levels into different companies means that each can speak specifically to its target customer and provide the service and support that is appropriate to the pricing levels it charges.

Operating in other countries

The example above of Coca-Cola is a good one here as it illustrates one of the main reasons why companies choose to set up subsidiaries.

A business may operate globally and decide to set up a new company in each area of operations, whether that be in separate countries or for entire areas such as North America, Europe or Asia.

Setting up a joint venture

Imagine an advertising agency that is tendering for a large contract.

They have superb skills with print media and broadcast advertising but none in digital advertising. They decide to work with another agency what have complementary skills.

The two companies decide to set up a subsidiary to bid for and carry out the work as a single brand. The print agency will be doing most of the work so they set up the company and invest 60% of the money.

In this way, the subsidiary is used to clearly define ownership and to service a specific account, with the work being done by the two original parent companies.

If you speak with a lawyer, they will tell you that this is the best reason for setting up an agency subsidiary.

By setting up a totally separate company, the parent is insulated from many of the risks should the new enterprise fail.

For example, take an estate agency that decides to open up a lettings arm. They set it up as a wholly-owned subsidiary and this is the entity that rents offices and employs staff.

If the business fails then the subsidiary company will go into administration or liquidation but the parent will remain unaffected.

Regulated industries often have requirements around ownership, management and reporting that cause increased costs for the business.

It makes sense to separate out regulated activities into a subsidiary business so that the extra costs and administration only affects a part of the enterprise.

This is why estate agencies often separate out their insurance and mortgage broking business into separate subsidiary companies.

Rewarding senior employees with shares is a great way to build loyalty.

But you may not want to give away part of the whole organisation when the person concerned only works in one area.

Alternatively, you may want to reward an executive only if a particular project turns out well.

As an example, imagine a recruitment agency that decides to set up a temp agency. They could appoint a senior manager as a director and then grant shares in the subsidiary when it reaches specific milestones.

Managing an exit and succession planning

Setting up separate entities means that their operations can be effectively ringfenced from the wider group.

This means that, as in our example of premier foods above, it is easier to sell off part of the enterprise without affecting the wider business.

This means that when the agency owner wants to exit, they can sell off parts as they wind down or use a management buy-out to sell a subsidiary and then a trade sale to sell the rest.

If the owner wants to step back but retain ownership, they can put people in charge of smaller parts of the organisation and then just retain a watching brief over the parent company.

Above all, setting up subsidiaries means that it gives the owner options when they want to make a lifestyle change.

The cons of setting up a subsidiary

If it was that easy then everyone would do it, right?

As you would imagine, there are some downsides to setting up a group structure.

There’s no getting away from the fact that the more companies you have, the more admin there is to do.

From extra Confirmation Statements for Companies House each year to separate employers’ accounts for payroll, each company will require managing properly.

Admittedly in many cases, these are simple matters, but you do need to be aware that subsidiaries will require extra administration.

In some cases, these can be a small as the £13 filing fee for sending your accounts into Companies House but of course, they all add up.

You’ll need to have an extra subscription for your bookkeeping software, there will be additional insurance costs and depending upon the size of the business, you may need an audit.

The message is that whatever size your subsidiary is, it is not free.

Each company needs to have a set of accounts but when you have several companies all forming a whole, then that means that you need to consolidate these.

It means that your reporting is less clear and unless you use specific software (see increased costs) then you will need to spend time getting these into shape if you want to see an overall picture.

This means that control from the centre is reduced and in many cases that’s a good thing, but owner/directors may not always be comfortable with this aspect.

In the pros section, we noted that a subsidiary is a separate legal entity meaning that the debts that accrue live and die with that entity.

But when a business is new, lenders, landlords and lease companies may require a guarantee before they will advance money or rent you an office.

A guarantee is a method of legally ensuring that if the subsidiary goes bust, the parent or its directors will pay any outstanding bills. Thus removing one of the key benefits of the subsidiary!

Along the same lines, it is important to remember the legal concept of vicarious liability.

This means that where a subsidiary or its directors break the law or incur fines, the parent and its directors can be held liable.

It’s a difficult charge to prove, but not impossible so don’t believe that setting up a subsidiary is some kind of get out of jail free card.

How to set up a subsidiary

So how do you go about setting up a subsidiary?

Naturally, there are different ways that you may want to constitute your subsidiary.

In its simplest terms, the parent company simply sets up a new company with Companies House (we can help with this) and then subscribes for all of the shares. This would result in a 100% wholly-owned subsidiary.

Alternatively, you could set up a company and then sell some of the shares to a joint-venture partner, or allot some to an employee share scheme.

You could also set up a partnership and make the parent company a partner.

We would always suggest that you take advice before choosing to set up a subsidiary as every situation is different and what might seem like a good idea could end up costing you money or increasing your tax bill.

So should you set up a subsidiary?

As you can see there are lots of plus points for setting up a subsidiary for an agency but we’d urge caution here.

Every company has different needs and aims and we simply couldn’t give a blanket assurance that setting up a subsidiary would be the right course of action in every case.

Our strong advice here is to contact us to talk over what you are aiming to achieve and we can then let you know how to go about it.

We can even set up your new company and take care of things like HMRC registrations and company secretarial duties for you.

Call us now and let’s talk.